Street Corner Renaissance > About Us 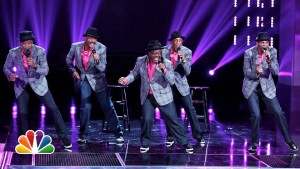 Looking forward to the past, Street Corner Renaissance (SCR) has defied the odds and did what many thought was either insane or impossible. The group’s founder & Artistic Director, Maurice Kitchen, was a frustrated twenty five year, career insurance industry claims professional; when he decided that enough was enough. “I started waking up every morning and praying; Lord, please don’t let me die a claims adjuster. This can’t be the last thing on my resume” says Kitchen.

Lamenting over unfulfilled dreams and lack of earnest effort in his pursuit, Maurice quit his job and began orchestrating his life’s 2nd act and ultimate encore performance.

Kitchen joined forces with likeminded founding members, Torrance Brannon Reese, the organizer of a successful mentoring program, and Kwame Alexander, a former Seventh-Day Adventist Pastor. Then came Anthony (Tony) Snead, an itinerant legal assistant and Charles (Sonny) Banks, a city worker on the verge of retirement and a life of golf. The five banded together “for one last Hoorah, forming a group of distinguished gentlemen a cappella Singers, dedicated to singing the music they loved from a by-gone era.

Well past their prime; all had been long suffering with life’s responsibilities, families and dreams deferred when this fantastic voyage began. And what a voyage it has been. December 2013, these “New Jack Seniors” found themselves in A’Cappella heaven when they joined the cast of NBC’s network hit show, “The Sing Off, Season 4.” SCR was an instant hit and crowd favorite, garnering over 60,000 YouTube hits overnight following their first of four performances. Prior to that they had a chance to work with their child hood idols, Otis Williams’ Temptations and some of the biggest names in music such as Chuck Berry, Kool & the Gang and Boyz II Men, among others.

If all of that wasn’t “fantastic” enough, SCR began the year 2015 with a 6 week engagement in Dubai, where they performed before a crowd of over 100,000 people from all around the world and just prior to that; opened two nights for Comic legend, Jay Leno)
These cats can flat out sing! Their infectious energy and versatile show-set offers audiences an authentic/interactive street corner experience; combining the polish of a seasoned Las Vegas act replete with humor and masterful stage craftsmanship (Think Rat Pack with smooth harmony and a soulful urban swag.)
Street Corner Renaissance’s professional good fortunes is the result of their unmitigated courage to live the Improbable Dream. “It’s now or never” exclaims Elder Statesman, Charles Sonny Banks. “We’re in a world without gravity where nothing can hold us down; putting a new spin on an old thing and making it do what it do. And it’s working!”,
…and the voyage continues.